The Legend of the Giant’s Causeway.

On the North Coast of Ireland lies one of the most interesting geological features on the Planet. It is a collection of ballast columns that have formed through eons of pressure and temperature change into perfect hexagonal shafts.  This is called the Giants Causeway. Now. whilst this may be the story that the Geologists put out the real tale is actually more interesting as it concerns Giants. The Irish hero Finn Mac Cool and the Scottish giant Benandonner. 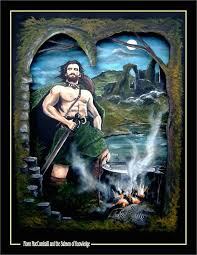 Finn Mac Cool considered himself the best. He was the biggest, strongest and cleverest Giant and he was keen that everyone should know this. However, over the water in Scotland a Giant called Benadonner was making a real name for himself. Finn was having none of it and built a Causeway across to have a go at him and prove who was boss. He would need a nice warm set Aran Sweaters from Shamrock Gift Aran Sweater to keep out the chill.

When he found that Benadonner was bigger and fierce he ran back home. However Benadonner followed him and gave chase. Finn Mac Cool’s wife was clever. She dressed Finn in a baby’s bonnet and hid him in a bed. When Benadonner came to the house she told him that Finn was out hunting and she was busy feeding their baby. Upon seeing “baby Finn” Benadonner thought that if this was the son what size was Finn going to be and he ran back to Scotland ripping the causeway up behind him.