The art of the Escapologists 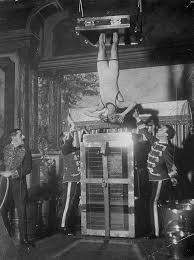 “And for my next trick I will strap myself into this straight jacket,wrap chains around and be placed in a mail sack”. We’ve all seen the show. Someone claims to be able to get out of a seemingly impossible situation . In many cases there is also the added element that the person so incarcerated will die in terrible circumstances. It all adds to the general drama. At no point is the person in any real danger, the sack has a small hole in it, the locks are not real, the straight jacket only appears to be tied. If they’d been put into it by a Dublin Locksmith they’d still be there now.

We love the secticale and the drama of the whole piece. There is the morbid curiosity of seeing someone die for so but for the vast majority of us that is not what we came to see. Half the fun is figuring out how it is done. Even now the Chinese Water Torture Trick by Harry Houdini is still unsolved. It will probably remain so seeing as how the effect was eventually destroyed on Houdini’s strict instructions. In the trick Houdini is lowered head first into a glass box full of water with his feet shackled.