First Floor, Nothing. The end of Grace Brothers

In the nineteen seventies a very popular sitcom was the show “Are you being served”. This was about the trials and tribulations of the first floor employees of Grace Brothers, a multi-level department store that catered for everything. On the First floor, run by the ex-Military man, but showing little military precision, Captain Peacock, was the Mens and Women’s Outfitters. Here it was that customers would come and be fitted up by Mr Humprey’s and Miss Slocombe. If they weren’t around then Miss Brahms was on hand to assist you or Mr Grainger for seniority and Mr Lucas if you were really stuck. 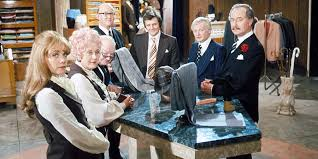 There never seemed to be many customers and those that were all miraculously disappeared when the theme tune came to an end allowing the characters to have a good old chat and do the comedy. It ran for thirteen years and remained a staple of early evening TV. It now seems deeply anachronistic on so many levels that it’s the kind of thing that If Netflix ever picked it up they’d put warnings on it. Mr Humpreys, as played by John Inman, being an interesting exception as he is a generally sympathetic yet still a camp character that would make us winch now. The less said about Mrs Solcombe’s constant reference to her pet Cat the better.

The other thing it shows is how we don’t use large department stores anymore. Unthinkable back then but if you’d wanted to get some Mens Diesel Clothes that was where you went. Much better and easier to go to https://www.louisboyd.co.uk/brands/diesel.html and choose from the comfort of your own home.